In earthquake design of structures, seismic events are defined by their probability to occur within a certain period. According to Turkish Seismic Code, there are 4 earthquake levels:

Level 1 : Ground motions for which spectral amplitudes are expected to be exceeded with a probability of 2% in 50 years (Rate of return: 2475 years)

Level 2 : Ground motions for which spectral amplitudes are expected to be exceeded with a probability of 10% in 50 years (Rate of return: 475 years)

Level 3 : Ground motions for which spectral amplitudes are expected to be exceeded with a probability of 50% in 50 years (Rate of return: 72 years)

Level 4 : Ground motions for which spectral amplitudes are expected to be exceeded with a probability of 68% in 50 years (Rate of return: 43 years)

However, if we consider the fact that such an earthquake is expected to occur once in 2475 years and a modern structure is not likely to exist in more than 100-150 years, it is not economically viable to do such a design. For that reason, structures are designed according to target Performance Levels, which are defined by the level of structural damage occuring in the structure. In other words, structural damage is permitted to occur in the structure subjected to a seismic event.

To explain more clearly, let’s consider a precast industrial building. If the building does not contain any hazardous exploitable material or if the owner does not demand otherwise, Turkish Seismic Code specifies this building to be designed to satisfy Controlled Damage Performance Level in Level 2 earthquake. The condition of the post-earthquake structure that satisfies Controlled Damage Performance Level can be described as follows:

“Overall damage is moderate. Some residual strength and stiffness left in all stories. Gravity-load-bearing elements function. No out-of-plane failure of walls or tipping of parapets. Some permanent drift. Damage to partitions. Building may be beyond economic repair. Falling hazards mitigated but many architectural, mechanical and electrical systems are damaged.”

Modern structural engineering is tending towards what is called Damage Controlled Design, in which not only life safety of occupants is ensured, but also structural damage is very limited that the building is fully operational after a seismic event. Precast concrete seismic systems connected with post-tensioning tendons are proven to be one of the most effective materials/systems for this aim. (Figure 1)

In precast post-tensioned seismic systems, precast members are connected at site by unbonded or bonded post tensioning strands that are placed through ducts in the beams. The significance of post-tensioning strands is that they are designed to remain elastic and thus providing self-centering capability to the structure and dramatically reducing residual drifts.

The connection behaviour is provided by a ‘gap opening’ mechanism, in which the structural damage concentrates in the joint region itself, rather than the structural members, as occurs in conventional concrete construction. An example can be seen in Figure 2, which shows results of experiments done by Wada et al. (Reference 2) As can be seen, there is significant structural damage and residual drift in the conventional joint, whereas there is very limited damage in precast post-tensioned joint. 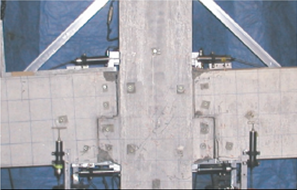